Corcoran Pollinator Project has had kind of a slow-burn summer this year due in part to three of our core team members, including me, being wrapped up in fieldwork and other travels much of the season. However, we did manage to put in two gardens so far, we have a full garden installation roster coming up, and we have some cool collaborations in the works.

In June Liz, Ellie, and I worked on adding native pollinator plants to Ellie’s garden (above). In return we received tons of Ellie’s native violets to share with other gardens.

In July, Kassie Brown of Renaissance Soil came to Corcoran to take soil samples of yards and gardens for a pilot study on the relationship between above-ground and below-ground biodiversity. Do native perennial gardens improve soil health? Stay tuned! 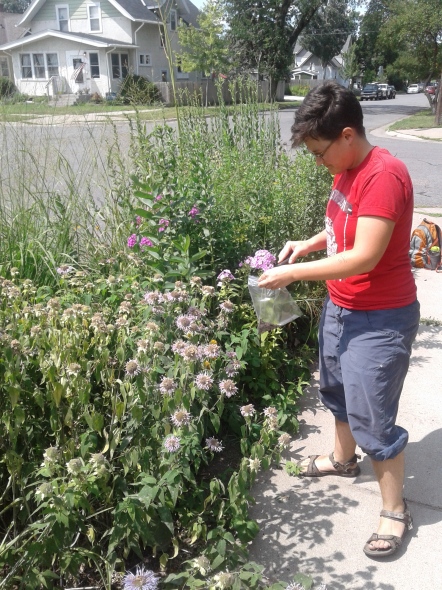 Here’s a screen shot. These maps are based on a survey of about 1,000 front yards in Corcoran and show the number of species in people’s gardens, whether or not they have native species, and whether they have room to add a pollinator garden. The idea is to be able to more easily visualize habitat density and connectivity in the neighborhood and to see where we can most usefully target our installations in the future. These maps wouldn’t exist without the expertise and generous help of University of Minnesota spatial data analyst and geographer Melinda Kernik–thanks Melinda!

If you want to play around with the map layers, check out the map app here. (Click on the layers icon in the upper left hand corner).

Speaking of people we are grateful to, many thanks to Elaine Klaassen of the Southside Pride for writing this lovely profile of the project, which appeared in last month’s Southside Pride edition.

Finally, here are some photos of our most recent garden installation at Kate’s house: 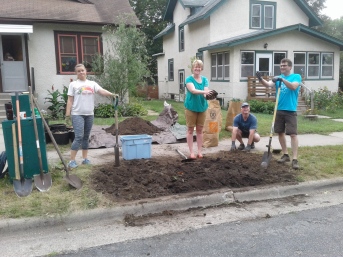 Thanks to generous plant providers Cynthia, Kevin, Deb, Leanna, and Ellie, we were able to plant 15 species including liatris, showy goldenrod, echinacea, heliopsis, columbine, bee balm, swamp milkweed, and a native sedge. Kate’s boulevard was already partially cleared because she was fixing up an empty spot left by a tree removal. There was a lot of extra soil built up–I saved some to use experimentally in seed starting for next year.

That is the bulk of the news from the summer. A couple other tidbits of note–we hosted Terry’s talk about getting started gardening with native plants at the Corcoran Neighborhood Organization office in August–I forgot to take pictures, but we might host a repeat later in the fall. We have streamlined our garden request and volunteer sign-up processes. And, we have seven more installations planned for September and early October.

Thanks so much to everyone who’s participated in the project this year! Happy gardening!